Suzann Pettersen has had a change of heart.

Pettersen took to Instagram Monday morning to issue an apology for her role in the controversial match Sunday morning, saying she is “gutted and truly sad” about what took place during her Four-Ball match with Alison Lee and Brittany Lincicome. 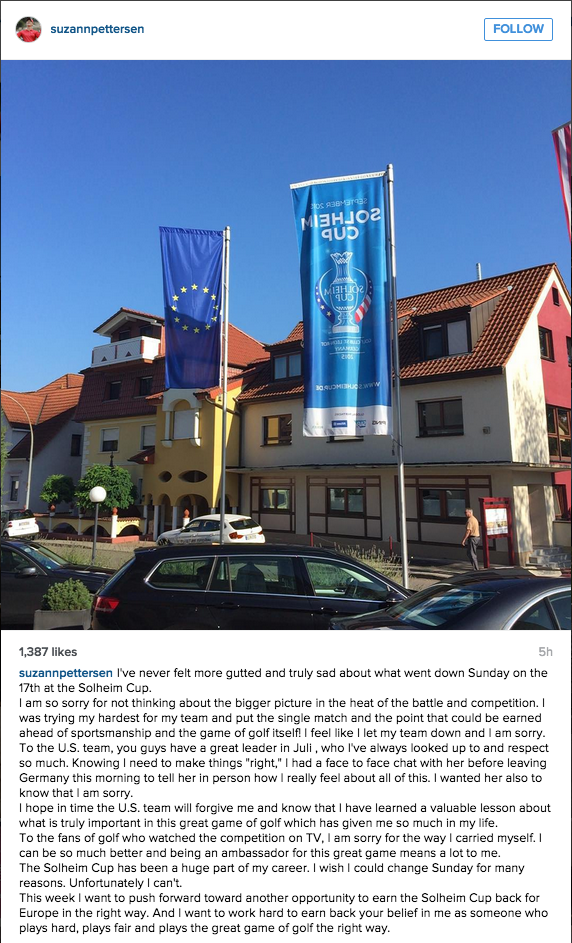 "I've never felt more gutted and truly sad about what went down Sunday on the 17th at the Solheim Cup. I am so sorry for not thinking about the bigger picture in the heat of the battle and competition. I was trying my hardest for my team and put the single match and the point that could be earned ahead of sportsmanship and thegame of golf itself! I feel like I let my team down and I am sorry. To the U.S. team, you guys have a great leader in Juli , who I've always looked up to and respect so much. Knowing I need to make things "right," I had a face to face chat with her before leaving Germany this morning to tell her in person how I really feel about all of this. I wanted her also to know that I am sorry. I hope in time the U.S. team will forgive me and know that I have learned a valuable lesson about what is truly important in this great game of golf which has given me so much in my life. To the fans of golf who watched the competition on TV, I am sorry for the way I carried myself. I can be so much better and being an ambassador for this great game means a lot to me. The Solheim Cup has been a huge part of my career. I wish I could change Sunday for many reasons. Unfortunately I can't. This week I want to push forward toward another opportunity to earn the Solheim Cup back for Europe in the right way. And I want to work hard to earn back your belief in me as someone who plays hard, plays fair and plays the great game of golf the right way."

Charley Hull played alongside Pettersen in the Saturday Four-Ball matches against Lee and Lincicome and due to darkness wasn’t completed until Sunday morning. All square at the 17th hole, Lee missed a birdie putt to win the hole and picked up her ball rather than completing the 18 inch putt she had left to hole out, stating she heard Team Europe concede her the putt. Pettersen and Hull said they did not in fact concede the putt, resulting in the Americans’ loss of the hole and the Europeans went 1-up with one hole to play. Pettersen stood by her decision during the press conference that followed the matches, saying she would have done the same thing again if given the choice.

The controversy sparked extra motivation for the Americans who went on to mount the biggest comeback in the history of the Solheim Cup, winning 8 ½ of the possible 12 points during Sunday singles to win back the Cup for the first time since 2009.