The Life Of A Legend: Patty Sheehan

The Life Of A Legend: Patty Sheehan

@m_donley4
Madison Donley is a senior journalism student at Northwestern University and a member of the Women's Soccer team. She is currently interning at the LPGA.
Topic: patty-sheehan lpga-founders-cup solheim-cup

No one saw it coming. After the awards presentation to Jennifer Kupcho and in honor of the long history the LPGA Tour has had with Mission Hills Country Club in Rancho Mirage, California, a group of past champions decided to take one last leap. What no one saw coming was 65-year-old LPGA legend Patty Sheehan taking a front flip into Poppie's Pond at the Chevron Championship this year. The move, which would have earned Sheehan a 9.9 score from the judges had there been any on site, adding to the Hall of Famer’s long list of astonishing moments.

Sheehan said, "I used to own a pool, and I would do a lot of flips off of the diving board. So it wasn't foreign to me. I just thought while walking across the bridge, why not do something spectacular and different."

Sheehan ended her career with 35 Tour wins, including six major championships, with a final major victory at the desert in 1996. She started swinging a golf club at three years old when her father put a sawed-off two-iron in her hands. Little did he know that his daughter would become one of the most consistent players in the LPGA Tour throughout the 80s and 90s.

"It just happened because my parents couldn't afford to have babysitters come and take care of us four kids. My parents went out to play golf, so we went with them," Sheehan said.

Sheehan switched from focusing on skiing to golf at the age of 14, despite being a nationally recognized junior skier and her dad owning a ski shop in Vermont.

"My dad was an Olympic ski coach in 1956. My three older brothers and I all ski raced when we were young. I tagged along with whatever my older brothers were doing at that time."

When Patty’s family moved west to Nevada, she decided that she wanted to quit ski racing and pursue golf.

"I think that skiing, being on the hill, and learning how to balance made a big difference in how I learned to play golf. Golf is not played on a flat surface. You have to know your ups and downs and all kinds of angles," Sheehan said.

She won three consecutive state high school golf titles in Reno. Sheehan said, "I played high school golf. It was just when Title Nine was passed. So I was a sophomore, and it was the first year that Nevada could have girls golf for high school. There weren't a lot of girls exposed to golf at that time. I wouldn't say that I was very spectacular either. I just happened to be a little bit better than the rest of them."

Sheehan said the best piece of advice she ever received was at 16-years-old playing with Susie Berning and George Archer. She said, "I had a big strong grip, and they told me, you'll never be anything or do anything in golf if you don't change your grip. So I went right to Ed Jones. I said, "Eddie, I've got to change my grip."

"He changed my grip to a neutral grip. I tried so hard to change my grip because, as everybody knows, it's the hardest thing to change. You don't feel like you're going to hit the ball properly. So when I was driving, I would have a nice grip on the steering wheel. When I was eating, I would grab my fork and practice. I would practice with my ski pole, and it took 15 months for me to really feel comfortable," Patty said.

Following high school, Patty attended the University of Nevada for three years, where she consecutively won Nevada state amateur championships from 1975–78 before they took the women’s golf program away.

Patty said, "I practiced the first two years with the girls, and then the third year, there weren't any girls playing anymore except for me. So I would go out and play with the men. I transferred to San Jose State, my last year of eligibility."

She won the California amateur title in 1978 and 79 and the NCAA individual title in 1980. San Jose State inducted Sheehan into its Hall of Fame in 1999.

Sheehan said, "I never graduated from college, but when I was finishing my fourth year, I was playing really well and won the NCAA championship that year. I was talking to Juli (Inkster) about it and said, ‘You think I should turn pro?’ She said, ‘Yeah, you should. What else are you going to do? You haven't graduated from college.’"

On her first attempt, Patty qualified for the LPGA Tour and was named Rookie of the Year during the 1980-1981 season following her victory at the Mazda Japan Classic. 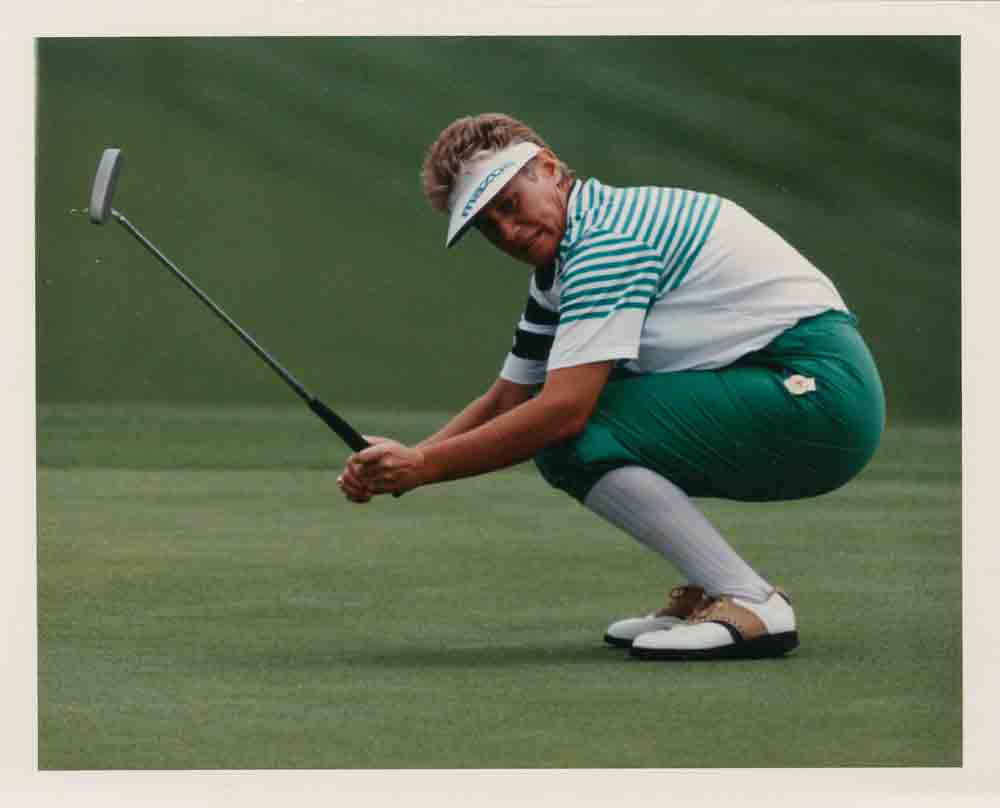 "I gave myself that chance and had no expectations of how I was going to do. I turned pro in the middle of 1980 and placed in the top five three times in those six events. I realized early on that I was supposed to be out there playing against the best women golfers in the world," she said.

Sheehan outperformed her previous year in 1982, winning two Tour events. In 1983, she won four titles, including the LPGA Championship, and was voted Player of the Year.

"My mom said, if you're going to go compete, you might as well win. (My parents) taught me never to give up, and those are the traits that have carried me throughout my entire life," Patty said.

That year was important to her because of the personal and financial trauma she has experienced the year before.

"Rebecca and I went through the earthquake of '89 in San Francisco. We were actually at the World Series Baseball game. And we got home and saw all the damage to the house, and we eventually moved to Reno again. During that time, we closed out the bank accounts and learned that we only had $2,000," Sheehan said.

Sheehan was able to practice through the mild Reno winter three hours a day to prepare for the following season. "I didn't have any money, but because I was able to get out and practice, I was pretty successful the next year. We were able to pay for the damage of the house, get it put back together and buy a new house in Reno because I won over $700,000 at the end of 1990."

Despite a fantastic year, one loss still stings. Sheehan had a nine-shot lead in the U.S. Women’s Open after 36 holes. Her 12-under-par score at that time was the lowest of any golfer, man or woman, the U.S. Open or U.S. Women’s Open. But she couldn’t hold on. Betsy King captured that championship.

"I was leading by about 12 shots at one point and ended up losing. I got hypoglycemic on Sunday. We had to play 36 holes, and I was just sick as a dog," Patty said.

Sheehan said the heat of that tournament in '90 was when she stopped wearing her infamous golf trousers.

"I tried to wear different garments than everybody else, and at the time, I started wearing knickers when head sports decided they were going to be making knickers and Payne Stewart was wearing them, and they wanted a female to wear them. I somehow got hooked until the 1990 U.S. Open when I couldn't handle the heat anymore," Patty said.

Patty returned to win the U.S. Women's Open at Oakmont in 1992, and she said it was her proudest achievement. Sheehan said, "After my huge collapse in the ‘90 open, I came back and persevered. I had to go into an 18-hole playoff on Monday, and it was hard. It was against my college teammate, Juli Inkster, and it was a tough emotional battle."

On the 18th hole, Patty hit it far-right. The ball landed in the rough. The USGA official ruled that her nearest point of relief was the fairway. Patty said, "I was in the thick, wet rough, and I probably wouldn't have been able to get my ball to the green. But since I had a shot from the fairway, I could hit onto the green, and I hit it about 18 feet away from the hole. And I made another birdie to go into a playoff with Juli. To this day, she's still not happy with that ruling."

At the end of her professional career, she won two more major titles. The first was in 1994 at the U.S. Women's Open and her final victory was in 1996 at the Chevron Championship.

Patty said, "There's a lot of reasons why it was special. My parents lived there at Mission Hills, and we had a house there two doors down from my folks. I always wanted to win the Dinah Shore. I love what Dinah did for women's golf."

At the time, Sheehan's dad had recently been diagnosed with cirrhosis and wasn't doing well. Sheehan said, "I felt this need to get this win under my belt because I wasn't sure how many times he was going to be watching me in the future."

Sheehan also surpassed her $5 million in career earnings during her last season in 1996 after tying for 10th place at the McDonald's LPGA Championship.

She ultimately chose to be a mom. Patty said, "I would be out there playing golf and feel the need to be home with the kids. I also just lost my dad. He passed away in '99. It was a tough time for me to play the Tour, so I decided something's got to give, and it's not going to be the kids."

Her retirement from the LPGA didn't stop Sheehan from being involved in the sport. She played on the senior Tour and served as captain of the 2003 U.S. Solheim Cup team.

Sheehan said, "My (Solheim) experience was wonderful. I had a great team, and we came back on Sunday afternoon from two points down to win the cup in Indianapolis. That tournament made me the most nervous because I was (out there) for my team and my country. I was happy that I wasn't playing. I was happy that I was the captain."

The golf legend came full circle, winning the World Ladies Senior Golf Open Championship as part of the 2006 Legends Tour. Both her first and last recorded victories unfolded in Japan.

"I love going to Japan. It was a little bit of a surprise. I didn't hit the ball off the tee all that great. I had to back down to my three wood and keep it in place to continue trying and win the tournament. It was a really cold and rainy day on Sunday. It was one of those that you can never give up because everybody else has to deal with the elements too," Sheehan said.

Now Patty said she doesn't keep up with the LPGA but still enjoys watching the U.S. Women's Open and The Chevron Championship. She prefers playing municipal golf courses at her leisure because people don't recognize her. She said, "I can go play golf and not have to be Patty Sheehan, Hall of Famer. I can just play golf."
Comments